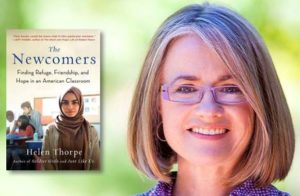 The United States is at a political crossroads around questions of immigration, multiculturalism and America’s role on the global stage. In The Newcomers: Finding Refuge, Friendship, and Hope in an American Classroom, Helen Thorpe’s intensive, yearlong reporting puts a human face on these debates: the faces of 22 newly arrived teenagers taking a beginner-level English Language Acquisition class at South High School in Denver.

The teenagers in Mr. Williams’s class, from Syria, Iraq, Burma, Eritrea, the Democratic Republic of Congo and other war-torn places, arrive with a limited grasp of English and of American culture in general. Still, they are teenagers: irrepressible, passionate, adaptive.

Readers learn about their families, the harrowing journeys that brought them to Denver, and how badly the students and their families want to “be American.” Together, these stories create an urgent portrait of the real crisis of displaced people around the globe, and a reminder that American wars overseas inevitably send refugees to our shores.

Helen Thorpe has been a staff writer for the New York Observer, The New Yorker and Texas Monthly. She has also written freelance stories for the New York Times Magazine, Slate, 5280 and other publications. Her radio stories have aired on This American Life and Sound Print. She is the author of two previous books, Just Like Us and Soldier Girls. The Newcomers is her third book.
RSVP to Faith Marcovecchio by April 16 at faithnick@msn.com. Everyone is welcome.